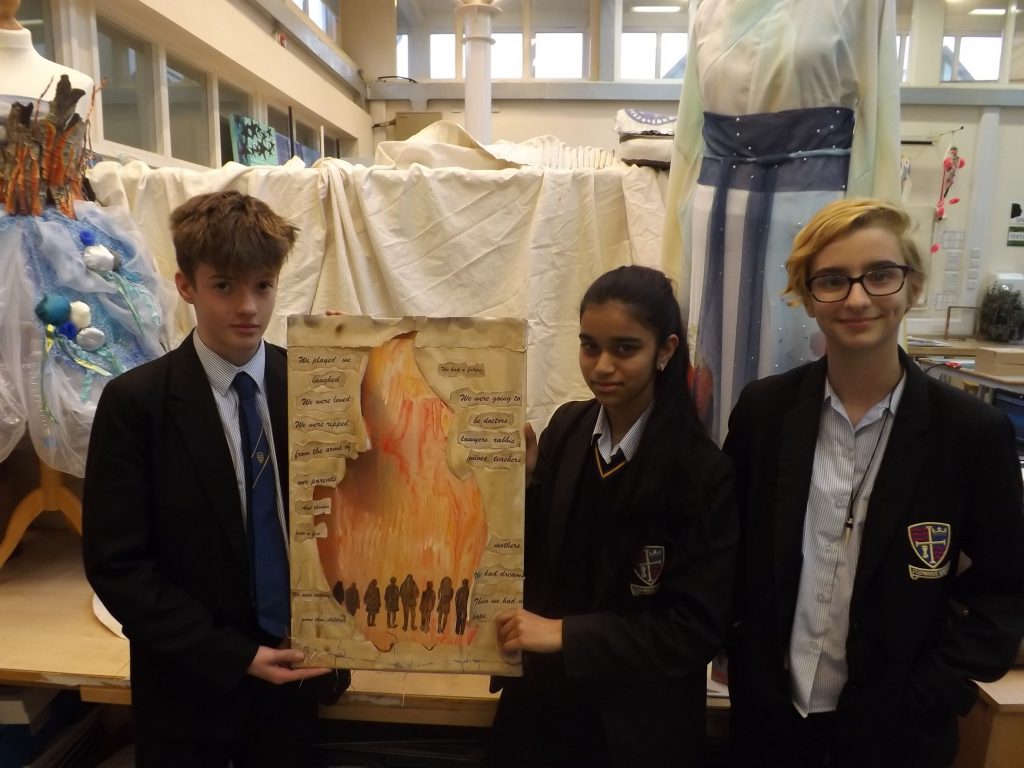 A memorial flame created by students of St Edward’s School, Poole, has been selected by a distinguished panel of judges to be part of a national art exhibition to commemorate the 75th anniversary of the liberation of Auschwitz-Birkenau. The exhibition, featuring 75 memorial flames chosen to represent each year since the liberation, is set to be unveiled at the UK Ceremony for Holocaust Memorial Day in London on 27th January 2020.

St Edward’s artwork was selected from a pool of more than 300 groups from across the country who registered to take part in the nationwide competition on a theme of ‘Stand Together’. It was launched by the Holocaust Memorial Day Trust (HMDT) to encourage more people to remember the six million Jews and millions of others murdered during the Holocaust.

“At St Edward’s, we want our students to have a rich, diverse and developed understanding of issues that go far beyond exams and the workplace. Stand Together was a thought-provoking project through which our students could explore this tragic part of our human history. Our students’ memorial flame is a wonderful reflection of the need to learn from the past and to stand together in peace, tolerance and unity.”

St Edward’s School, based in Poole, is a successful and distinctive joint Roman Catholic – Church of England Voluntary Aided School, one of only a handful of such schools in England and Wales, which educates more than 1000 students from the age of 11 – 18. They have been using resources from Holocaust Memorial Day Trust for the past two years to further educate their students on the Holocaust. The resources have supported whole school assemblies and enabled St Edward’s to consider subsequent genocides and the personal stories of survivors and the families of the victims.

“The project has truly been nationwide and at a time when we know identity-based hostility is increasing, it is heartening to see so many groups and communities come together and pay tribute to victims of the Holocaust in this way. I’d urge everyone to get involved in activities for Holocaust Memorial Day 2020 by visiting hmd.org.uk.”

For more information or to arrange an interview, contact Darren Northeast PR (working on behalf of St Edward’s School) on 01202 676762 or pr@darrennortheast.co.uk

Holocaust Memorial Day Trust (HMDT) encourages remembrance in a world scarred by genocide. We promote and support Holocaust Memorial Day (HMD) – the international day on 27 January to remember the six million Jews murdered during the Holocaust, the millions of people killed under Nazi Persecution and in subsequent genocides in Cambodia, Rwanda, Bosnia and Darfur.

Each year across the UK, thousands of people come together to learn more about the past and take action to create a safer future. Together we bear witness for those who endured genocide, and honour the survivors and all those whose lives were changed beyond recognition.