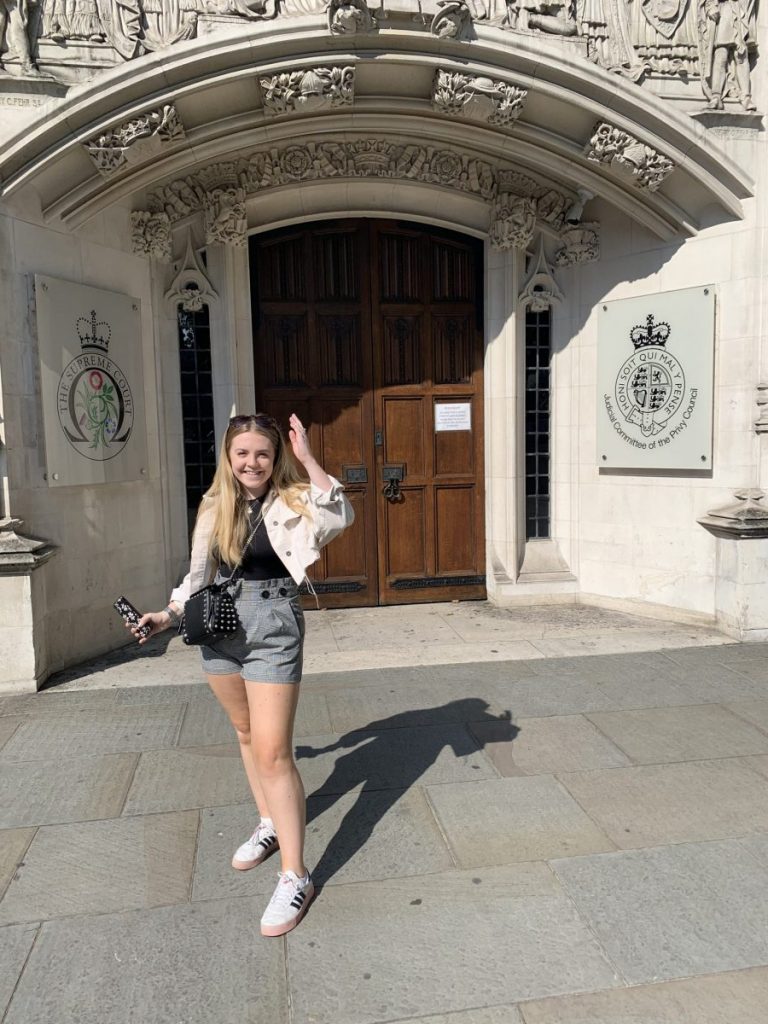 I chose to stay at St Edward’s because I enjoyed my time so much in the lower school. I loved the community feel of the school and I could sense that it would be even greater in sixth form.

How did you find your experience in St Edward’s sixth form?

I loved my time at St Edward’s sixth form. The time flew by! I built a fantastic relationship with my teachers who supported me from my very first day to the last. I pushed myself into trying new things; the most memorable being the Historical Association’s Great Debate where I won the regional debate to make it to the national final at the Houses of Parliament, it was a surreal moment. I thoroughly enjoyed being able to study three subjects that I got to choose; two that I had loved in lower school and one that I had never studied before.

What A Levels did you do?

I studied History, Drama and Politics.

What did you enjoy the most in your A level subjects?

I enjoyed all three of my options. In History I loved learning about the Cold War and the timeline of Russia (although it did make me realise that I prefer modern history a lot more than ancient!). Politics was the first time that I thoroughly looked at the American system of justice and government, and it fascinated me to compare it to the UK’s system. Studying Drama meant that we got to act but we also studied scripts from Shakespeare as well as more modern plays; I loved acting, getting lost in the journey of a character and developing their personality so the audience no longer sees the actor but only the character.

Why did you chose to study A levels at St Edward’s?

I chose to stay at St Edward’s because I enjoyed my time so much in the lower school. I loved the community feel of the school and I could sense that it would be even greater in sixth form.

How did the teachers support you?

My teachers were incredible. They were on hand whenever I needed them, whether that be by email or in person. Mrs Sinaguglia was always ready to listen to me – whether it was about politics, history (as I had her for both) or applying to university (even after I had left!). The teachers always listened with no judgement before offering all their support – nothing was too much for any of them.

How different was sixth form to normal school?

Sixth form didn’t involve five lessons a day like normal school. You are given study hours which allow you to spend more time to revise and do the work. A Levels are more in depth than subjects studied in normal school and so a lot more time is spent working on one aspect of a subject. You also grow a closer relationship with your teachers and classmates as you spend more time with them since you only choose three or four subjects.

What did you think of the campus and extracurricular activities?

I loved having a sixth form building with a common room and study room that allowed us to separate social and study times. Extracurricular activities were just as available in sixth form as normal school – I remember there being lots of sports as well as societies (I co-founded the Politics Society) that allowed us to mix with younger students in the school and help them see what other options are available in their futures.

What did you go on to do after sixth form?

After sixth form I took a gap year. I worked full time for most of it, before going travelling but this got cut short because of COVID-19. It was still amazing all the same. Then, in September 2020 I moved to the University of Bristol where I am studying Politics and International Relations.

What words of advice would you give to those thinking about applying to St Edward’s Sixth Form?

I would say do it. Embrace every opportunity to study what you love, with teachers who love it just as much. If you can, talk to your teachers about sixth form, or ask to speak to a current Sixth Former so you can hear exactly what it is like. If you are unsure right now that you may not enjoy your time, then I would say you will. No student is ever left fending for themselves or left behind if they need help.

If you do attend the sixth form enjoy your time there because it will go so quickly. Socialise and make time for your friends and classmates as you will all need each other’s love and support when it gets to exam season. Embrace every opportunity that may come your way and don’t be afraid to ask for help.